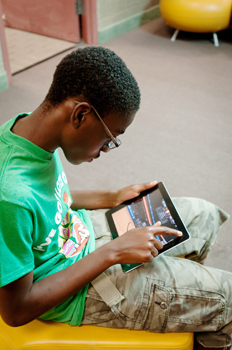 A new study just published shows that pre-teens (8-12 years old) spend 4.5 hours per day on laptops, smartphones and tablets, while teens spend 6.5 on the same devices. This does NOT include time spent on screens at school or for homework. Add in TV time and/or X-Box and the average American pre-teen spends 6 hours on media, teens 9 hours! That’s mind boggling! Another study showed that by age 7 children will have been in front of a screen of some sort for a total of 1 full year, 24/365!

53% of pre-teens have the own tablet and 67% of teens have their own smartphone. Mobile devices account for 41% of all screen time for pre-teens and 46% for teens. Girls prefer social media sites like Instagram, boys prefer gaming sites. Only 10% of teens enjoy viewing social media but feel they need to view it in order to stay up-to-date with what’s going on.

Teens multitask with media. Some 50% say they use social media or watch TV while doing homework, 60% texts, and 75% listen to music. The majority of teens say it does not affect their school work but studies out of Stanford clearly show that it does. It affects focus, memory, and the development of self-regulation.

Studies also show that social skills are not being properly developed due to social media’s influence, skills like empathy, reading facial expressions, and starting and maintaining conversations.

I personally believe that limited recess time and restrictive touch policies are also affecting social skill development. Other studies show that the depth of conversations remains very shallow when smartphones are present and occasionally viewed. The mere presence of a smartphone left on the table affects the depth of a meal-time conversation! As one author put it, “Empathy is really, really under siege.”

This is a huge wake-up call! How children socially relate and regulate their attention is changing rapidly and will have huge implications on cultural issues in the future. Schools are pushing for more technology without fully understanding how these resources affect children. We are creating a very disengaged and distracted society and as a result we’ll see more violence, more addiction, and higher rates of depression and anxiety.

Chris McCarthy, PhD, LPC is a Licensed Professional Counselor. His two main specialties are working with children & teens with anxiety, depression, and behavioral issues, as well as couples counseling. Connect with him on Google+