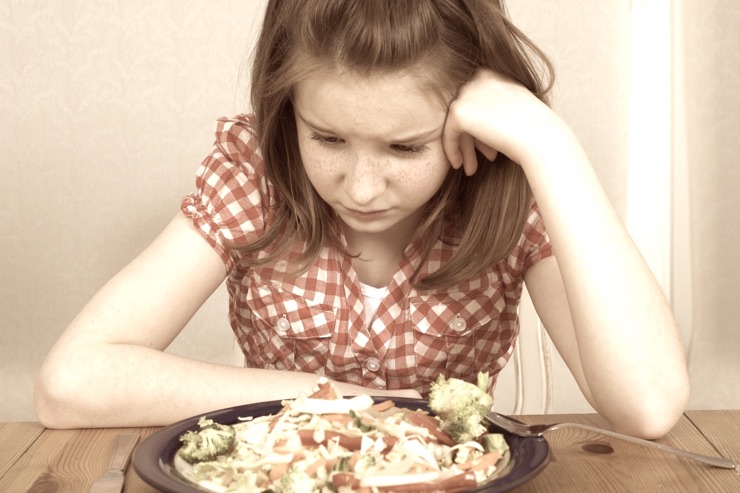 There is a very real possibility of your child suffering from another psychiatric disorder in addition to her childhood anxiety disorder. With it being National Eating Disorder Awareness Week this week, it seems fitting to discuss the likelihood that your child may be experiencing signs and symptoms of an eating disorder in addition to her anxiety disorder (what is known as comorbidity – an additional disorder co-occurring with a primary disorder). Research has shown a lifetime prevalence of depression and anxiety disorders that is common and linked with eating disorders and in women with disordered eating behaviors.

What are Eating Disorders?

Let’s back up a bit and first discuss eating disorders. The Diagnostic and Statistical Manual of Mental Disorders (DSM-5) describes anorexia nervosa as being characterized by distorted body image and excessive dieting that leads to severe weight loss with a pathological fear of becoming fat. Bulimia nervosa is characterized by frequent episodes of binge eating followed by inappropriate behaviors such as self-induced vomiting to avoid weight gain, once a week at a minimum for at least three months. Binge eating disorder has also been recently been added to the DSM-5 as its own category of eating disorder, and is defined as recurring episodes of eating significantly more food in a short period of time than most people would eat under similar circumstances, with episodes marked by feelings of lack of control. Someone with binge eating disorder may eat too quickly, even when he or she is not hungry. The person may have feelings of guilt, embarrassment, or disgust and may binge eat alone to hide behavior. This disorder is associated with marked distress and occurs, on average, at least once a week over three months.

What Are The Symptoms?

The typical onset for anorexia is between the ages of 14-18, while bulimia generally occurs in later adolescence or early adulthood. The eating disorder sufferer has a morbid fear of becoming fat and is irrationally preoccupied with being thin. There are many rigid, ritualistic behaviors designed to lose weight, but the obsessive worrying is focused on becoming fat. These children can also have significant anxiety, pressure themselves to excel and meet their own high expectations, seek perfection, and endure chronic stress as a result.

Signs and Symptoms To Look For

Impact On The Brain

Neurologically, individuals with anorexia have brain atrophy and less gray and white matter. Cognitive dysfunction (perception and reasoning) is common with low body weight. The amygdala (associated with fears, phobias, and emotional dysregulation) is more activated in individuals with an eating disorder. Some of these brain abnormalities persist after weight restoration, which may contribute to the severity of the disorder and also may negatively affect recovery – another reason why early detection is imperative.

Eating disorders may resemble Obsessive-Compulsive Disorder (OCD), as well. Children with OCD can have many unusual food preferences and rules around eating. However, restricted food intake in OCD is generally due to fear of contamination, not due to fears of gaining weight. Also, other than a preoccupation with weight, there are no obsessions associated with eating disorders.

Treatment for eating disorders can be similar to treating anxiety-related disorders. Traditional Cognitive Behavioral Therapy (CBT) can be used to help with self-monitoring, coping, cognitive restructuring, and relapse prevention. Also, emotion acceptance behavior therapy, which builds on CBT by connecting symptoms with emotion avoidance, and Dialectical Behavioral Therapy (DBT), which unites extremes and moves towards a more overall balanced position, can both be helpful. Additional treatment approaches can include intuitive eating, exposure therapy and family-based therapy.

As a parent, you can be a major part of your child’s recovery from an eating disorder. What may look like just childhood anxiety or OCD could actually be an eating disorder. Take the time to recognize the signs and symptoms of eating disorders and help your child get the treatment they need. With early intervention, you are significantly reducing the chances of your child developing a full-blown eating disorder and increasing the probability of a full recovery. Seek support from a therapist or a mental health professional to help you and your family deal with this issue appropriately, and to help build a recovery plan together.